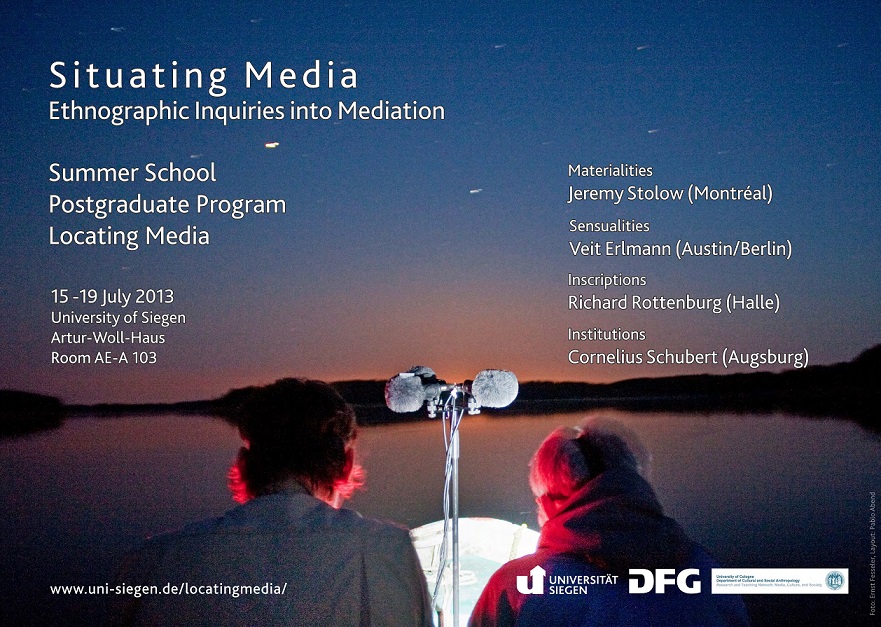 This summer school addresses current methodological and theoretical challenges of qualitative media‐studies. Conventionally, media have been understood as transcending time and space. More recently, however, mediation and the movement of media actors and media products across space are explored in terms of actor‐media‐networks. This perspective allows scholars to situate media practices and to identify “communities of practice” that evolve in and through the circulation of signs, things and persons. If we regard media as quasi‐objects that create, shift, and translate agency, the battle cry of actor‐network theory becomes an imperative for media‐ethnography across the disciplines. “Follow the actors” challenges us to “follow the natives” and to take into account human and non‐human elements in order to understand how “scaling is achieved by the actors themselves” (Latour).

It is an elementary observation that all social practices, including media practices, can only take place within their particular physical environments, and in conjunction with the specific objects, instruments, and technologies required to “make things happen.” What remains far less clear is what we mean by the word “material” and what sorts of agency we ought to ascribe to the things with which we are in traffic (including tools, resources, and physical constraints). Drawing upon several lines of inquiry into the study of technology and material agency – including actor network theory and media archaeology – this input paper and seminar discussion will explore possibilities for ethnographic research that attend to the complex of relationships among human actors, their perceptual embodiments, their instruments and tools, their material environments, and the larger discursive frameworks within which all such relations are made commonsensical, meaningful, or problematic. Our discussion will focus especially on some of the ways material and technological agency have been treated in the study of “religion and media,” an exploration that hopefully will provide instructive examples for the design of future ethnographic research.

Media have long ceased to be understood as neutral technologies that merely extend, amplify, or enhance our sensory capabilities. Media shape our sensorium and are shaped by it. In fact, the senses increasingly become media themselves. The way we see, hear, smell, taste, or touch
cannot therefore be reduced to a simple input/output relationship. Our sensory engagement is deeply enmeshed with both our bodies and the materiality and operative logic of media technologies. The sense of hearing has traditionally been associated with heightened awareness, epiphany, the supernatural, and the immediacy of presence. The emergence of modern media has enormously augmented the utopian power of such phantasms. An early example are the self‐experiments by the pioneer of electrochemistry Johann Ritter around 1800, which will be taken as a starting point for discussion in this section. Electrocuting his ears, Ritter elaborated a far‐reaching theory of auditory perception that merged the human ear, electric wires and the newly invented battery into a heady mix of magic sensation, media technology, and rationality.

The concept “technology of inscription” makes a twofold reference to inscription. On the one hand, it refers to devices of inscription that translate realities into specific codes and forms that can travel or can connect with other codes and forms. Inscription devices range from analog forms (like patient record, customer record, police report record, but also photographs, x‐ray imaging) to complex digital technologies (like sonography, MRI‐imaging, digital data banks). On the other hand a technology of inscription is, like any other technology, inscribed with a rich array of rules, meanings and values about the user, the use of the device, the material and institutional context, and the future that is hoped for by using the device. Social practices of ordering are nowadays normally conceived as implicating different dimensions of materiality and often technologies of inscription are thought to be at the core of ordering practices. What becomes visible when technologies of inscription travel – leave their usual institutional context – and become involved in experimental practices and the making of new institutions?

Mediation practices, and the de‐ and re‐materializations that go along with them, build social, political, economic and religious institutions. They structure mechanisms of cooperation and are processed in “centers of calculation”. Institutions draw things, signs and persons together over vast distances and provide the means for (social) control. In contrast to classical understandings of institutions as mere cognitive and normative frames, institutions are increasingly regarded as socio‐material arrangements. Also, institutions are not seen as fixed and powerful structures, but as locally accomplished and inherently unstable entities. The input paper and the following discussion will address the socio‐material unfolding and displacement of institutions and relate them to the study of technical infrastructures. This will lead to methodological questions concerning the possibility of analyzing institutions ethnographically. First and foremost, institutions are conceptual constructs which cannot be observed directly, they can only be inferred upon through empirical instances. This poses the challenge of how to relate empirical and conceptual categories in the study of socio‐material institutions.